You are here: Home » Artists’ Others: Ingmar Bergman’s The Touch 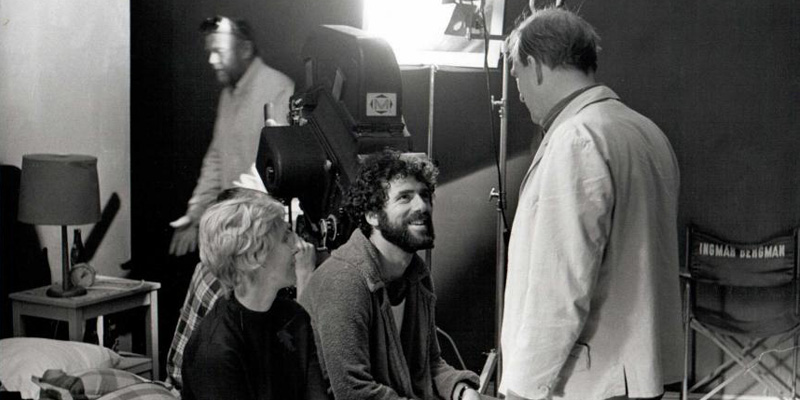 For some filmmakers, an introduction is null. Ingmar Bergman’s contribution to cinema is dizzying in depth: The Seventh Seal, Wild Strawberries, The Magician, Persona, Cries and Whispers, Hour of the Wolf, Fanny and Alexander, the Virgin Spring, Winter Light, the Silence, Through a Glass Darkly, Scenes from a Marriage—all from one director. Most filmmakers would go to their grave thrilled to simply be involved in just one of these works—strong, complete and wholly realized films.

And, yes, while these works are peerless, perfect distillations of Bergman’s themes and vision, not much has been said of the lesser-known films. His early works, designed for the theatre and sometimes filmed hastily, are now being restored and regained due to the work of Janus Films and the Criterion Collection. Some films, though, remain lost. Bergman’s 1970 film, The Touch (Beröringen), is one of those works. Why?

An initial glance of The Touch promises a substantial showpiece: Bergman, at the height of his powers (The Passion of Anna released just a year before), with regular contributors Max von Sydow and Bibi Andersson in lead roles, along with Elliott Gould, an American face fresh out of Robert Altman’s M*A*S*H a year earlier. All of these people, feasibly, would make something great together.

What occurs, though, is far in quality from Bergman’s standard. Not to say The Touch is entirely awful—some fleeting moments remain on par alongside the director’s strongest work. Regretfully, though, such instances are lost in shuffled disorder. Gould plays an American, David, who comes to Sweden on an archaeological dig. He quickly falls for Andersson’s Karen, a married housewife bored enough in her life to entertain David’s brash advances. David’s desire leads him to fiercely lure Karen with gushing compliments, going so far as to hit on her openly in front of her husband, Andreas (von Sydow). Karen obliges David’s come-ons and then succumbs to their inevitable affair.  At one point, before their first meeting, Karen dances around the house preparing in the most un-Bergman of scenes.

Instantly, before they even get into bed, the clashes begin. It’s obvious David is a louse, often pouring the next whiskey before his drink goes dry. Karen is cold and unsure of her new-found feelings of infidelity. David’s alcoholism becomes violent: he assaults her, driven by a deep-seated self-hatred, played out when he barks Germanic profanity at her mid-intercourse. Bergman tosses in a line, later, about David’s family being Holocaust survivors, which, of course, explains everything. Considering Bergman’s other work, psychologically rich and built on consummate characters, what gives here? Invoking the Holocaust is nothing but cheap paint, soullessly covering the lack of realization found in David’s character. The Bergman behind the camera of, say, Winter Light, would scoff at this one-line background.

Andreas quietly sees the changes in his wife (a terrible liar), playing his sensible Swedish stoicism against her now unnerved disposition. Karen is put to a choice: stay with Andreas, who will forgive her of transgressions against him, or leave, permanently, with David. Karen refuses Andreas’s ultimatum, tries to find David abroad but is ultimately rejected. At some point, she’s visibly pregnant, which adds nothing to her character, more a necessity of filming Andersson’s own pregnancy at the time. Its revelation never seems like a burden to her or the men in her life, rather just a minor hindrance in her search for satisfaction.

With the film focusing largely on Karen’s state of mind throughout, one would expect Andersson to deliver an anchoring performance. She floats, instead, aloof and distanced. Andersson is a potent actress, but in the film’s somewhat forced English translation, she is always a few degrees displaced from an emotional core. Gould, too, capable of rich expanses elsewhere, fumbles the opportunity. In his monologue to the camera, he appears slouched, casual: the Philip Marlowe Gould, not the once suicidal David, driven by deep desires. Von Sydow, if it’s a consolation, remains without fault. Andreas appears as if from another picture: subtle in his emotional changes but reeling inside from Karen’s betrayal. (His confrontation of David, aware Karen is in the bedroom a door away, is piercing.)

In addition to von Sydow’s typically solid presence, the camera captures some beautiful images (David and Karen gazing at the recovered statue of Mary he discovered, eyes lost in light) and successful set pieces (the confrontation, the church). Sven Nykvist, Bergman’s long-time cinematographer, works in new hues in The Touch: bold, autumnal colors of the fall, abundant with the characters’ melancholy. (The melodramas of Sirk and Fassbinder come to mind more than once.) Glances of future work, the shocking red riches of Cries and Whispers, bleed out from the frames.

But despite these advances, The Touch always seems handicapped. Its beautiful setting only helps distract momentarily from the film’s clunky English script (the film co-produced by ABC), constantly a mouthful for anyone but Gould. It’s telling Bergman’s two most disregarded movies are both in English (The Serpent’s Egg being the other). And, sadly, what could be a wealthy story just never flows; Bergman took the story from his own life, its closeness perhaps holding him back from a deep exploration (which is in stark contrast to the autobiographical riches of Fanny and Alexander).

Unlike writing or other arts, a director can’t scrap a whole film production to start over with fragments; if a work steps out with ill-footing, it falters to the end. Seams stay too obvious on screen. Bergman notoriously hated The Touch, keeping it out of print. Thinking of the film as a rough draft, though, a stepping stone for Bergman’s next moves, helps one appreciate its strong spots, however scattered. After The Touch, Bergman burst forth again with creativity: Cries and Whispers and Scenes from a Marriage directly followed it. While not an essential viewing, The Touch helps us understand how delicately Bergman’s craftsmanship relied on multiple pieces working in collaborative unison.