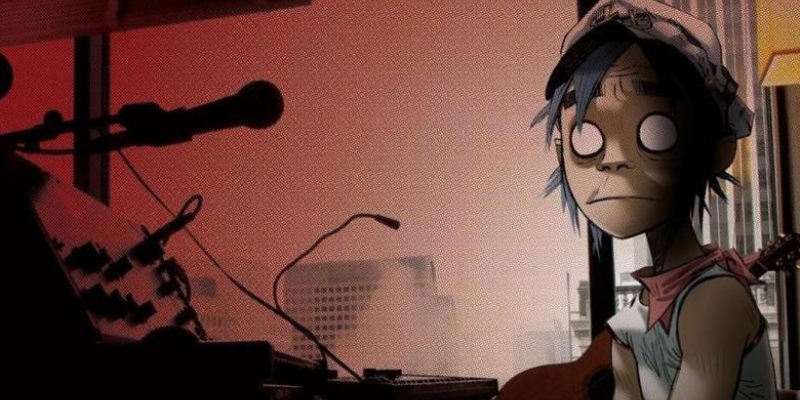 I’ve been a follower of Damon Albarn for years. Tracked his work with Blur, which, as many agree, is pretty tremendous; he was a major force behind the sound of the film Ravenous, which is consistently at the head of my favorite film scores, and has really devoted his life to all around stretching boundaries between what may be popular and not so popular forms of expression, in music and elsewhere.

That said, I could never really find a door into Gorillaz.

As stated on Wikipedia,

Gorillaz are a British musical and visual project created in 1998 by Damon Albarn and Jamie Hewlett. The project consists of Gorillaz itself and an extensive fictional universe depicting a “virtual band” of cartoon characters. This band has four animated members: 2D (lead vocalist, keyboard, and melodica), Murdoc Niccals (bass guitar and drum machine), Noodle (guitar, keyboard, and occasional vocals) and Russel Hobbs (drums and percussion). Their fictional universe is explored through the band’s website and music videos, as well as a number of other media, such as short cartoons. The music is a collaboration between various musicians, Albarn being the only permanent musical contributor. Their style is a composition of multiple musical genres, with a large number of influences including alternative, rock, hip hop, electronica, dub and pop.

The idea of this is phenomenal and I’ve always loved it. Their multimedia component is beyond compare with interesting creations that really pushed the form in their time.

Though the initial ideas for a live show required tweaking—which did happen by the time they made the end run—they always were an attempt at questioning the status quo of everything we knew.

The effect of this on the music was evasive. From the beginning, it was something I should dig. Obviously well-crafted and interesting, with blends of everything under the sun into ways that make sense, in attempting to listen I always found myself coming up short. Never able to reach the tree tops that informed how it was I could coexist in the frame. Beyond a few tracks that could grab me, I was lost.

Then, by chance really, I snagged their album The Fall from the library. On the record is a track called Amarillo. It’s a perfect song. Three and a half minutes in length, moving between the realms of known and unknown, telling a story deeply felt and expressed yet not quite so clear as to its richness, for that gap is yours to fill. It gets in and out before you know it requiring one to press repeat for it cannot be over so soon.

I’m not sure why, but this offered me a door, a way in. I could backtrack and reinvestigate with some foundation and allowed a richer embrace of the entire construct. It’s a compressed notion of all that came from an extensive experiment that knew where this world was heading before many of us did. And in that light is a tragic recognition of a world left behind.