You are here: Home » Jeff Beal’s House of Cards 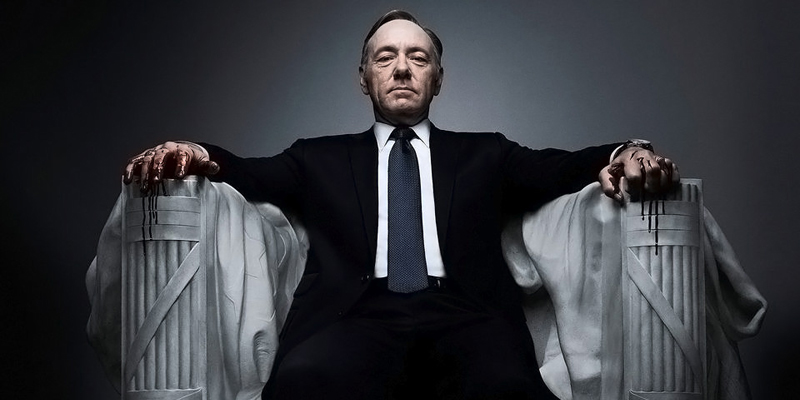 Movies are not unlike children, in that they should be seen and not heard — meaning that if a movie’s soundtrack really works, you shouldn’t even notice it. Jeff Beal’s score is so well-integrated…that you might leave the theater without remembering a thing about the music. But the soundtrack holds up superbly on its own, and it doesn’t become apparent just how well it fits…until you consider it as a separate entity. – the News and Observer

What Netflix is doing with its flagship serial drama, House of Cards, is what every media production company strives to do with varying degrees of success: tracking and analyze its audience’s viewing habits.

My Netflix usage dictates that I am the prime demographic for House of Cards, and I love it. The cast is fantastic, I love the natural rhythm of classic political conspiracy, and I could watch David Fincher’s work for hours. I find his films to fill the void left by Stanley Kubrick’s passing; eloquent, smart material that also succeeds critically and at the box office.

Something I was not aware of until I started watching, that has since dominated my experience of viewing, is that Jeff Beal did the music. With House of Cards, Beal has a platform to continue what he started with HBO’s Carnivàle (2003-2005) with a more modern, streamlined palette. What he did with the arrangements for Carnivàle was truly something new, and this same quality and experimentation is audible in House of Cards.

So, who cares? Why should the audience care? Music is just supposed to support the larger construction, right?

Up until the last decade this argument could maybe hold water, but music for film and television took an intense leap in recent years as filmmakers and television creators appreciate its tenable placement in narrative and allow its construction to either begin earlier in the process or exist more prominently in the finished presentation. Music now assumes equal billing with the stars.

I became familiar with Jeff Beal through Carnivàle, and his work was what bonded me to the show. Tasked with remapping the aural, emotional history of depression-era America, Beal spoke to the expanse of narrative of history without contrivance or back-and-forth style-appraising.

Unknowingly, I experienced Beal’s work in Ed Harris’ Jackson Pollack biopic as well as in the Carnivàle-esque pseudo western Appaloosa. Both of these are achievements (I would love to see Appaloosa, though, without its opening/ending voice-over that both sets up the story and takes the viewer right out of it), and in the case of both films, the music struck me, the way it mixed disparate ideas into a whole that served the larger narrative, but I did not seek out Beal’s name. Then Carnivàle came along and I was set on edge. The foundations of my soul spun when I heard arrangements unlike anything I had heard before. Jeff Beal’s music broke away and reset its development as an art form in order to occupy this other reality full of real characters and emotions.

I am excited to see where House of Cards takes viewers and how Fincher will capitalize on a successful television-format run, but I am even more excited to see how this Netflix project will enable Beal to see through those instincts he was following on Carnivàle. Since its demise he has not gotten to exercise the particular considerations its ongoing narrative allowed — not until House of Cards.

Jeff Beal’s House of Cards is available to download from Amazon.com and will be available from Varese Sarabande on April 2.