You are here: Home » Supernatural Strategem 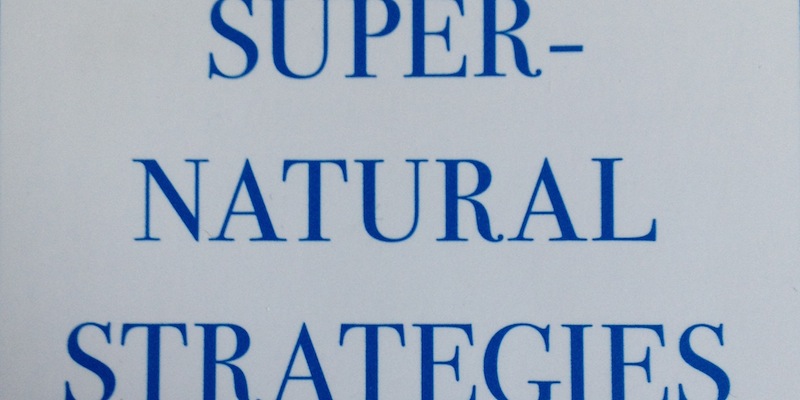 1. Ian F. Svenonius’s Supernatural Strategies for Making a Rock ‘N’ Roll Group (Akashic Books, 2012) has an excellent and clever concept, and it plays off the (now antiquated) idea that rock ‘n’ roll is the Devil’s music. For sake of that, the book might be about thirty years too late. Now, the Devil is uncool, and so is rock ‘n’ roll. I suspect that what Svenonius might be doing here is akin to the passive activity of the Committee to Keep Music Evil (or Akashic Book’s efforts promoting ‘reverse gentrification’). As such, Supernatural Strategies can be considered as yet another entry in the campaign to keep rock ‘n’ roll, well, rock ‘n’ roll.

2. Despite its intentions, Supernatural Strategies doesn’t quite succeed. Opening the book, readers might expect some kind of tongue-in-cheek, Crowley-esque, faux-occult roadmap. That would have been fine, and there are moments where Svenonius goes into this mode. The first section of the book describes a seance with various dead rock ‘n’ roll icons, which Svenonius personifies through various living room affects (rusting curtains, etc.). The first mistake is that all of the rock ‘n’ roll icons speak the same (and share the same leftist beliefs). I don’t think Svenonius is setting out to write great literature, and he’s being wryly transparent with his seance device, but this sort of wryness wrecks the book’s attempt to be a type of occult roadmap. It’s as if Svenonius is too hesitant to go into full Crowley mode. And, as a result, we get Svenonius writing in a few different voices: the occult participant, the anti-capitalist, the music critic, the rock ‘n’ roll historian, the zine writer. None of these voices are sustained long enough to give the book a cohesive voice.

3. Svenonius, at least in Supernatural Strategies, is strongest when he’s writing as a critic. The chapter on sex (titled, ‘Sex’) is an example of this. At eighteen pages, it’s the longest chapter in the 251-page book, and it’s also the strongest because Svenonius is staying mostly in one voice. He reverts to Marx a lot, which is fine (if not also a little tired), and is sometimes too simplistic in his historical summations, but in the same way he is not trying to write great literature, he’s not trying to be a scholar either (at least, I don’t think he is).

4. I’m not sure who the intended reader is for Supernatural Strategies. Rock ‘n’ roll is now mostly out of the public spotlight, and is either realized entirely on a Macbook, or the Internet, or anywhere from medium-sized venues to house basements with dirt floors. That’s fine. It’s still being made, but it’s not as big as it used to be (because the shock-value of rock has been commoditized). As such, it’s hard to say who is playing rock. There are still teenagers making good hardcore and punk rock, there are ‘Millenials’ dabbling in various music forms, there are Gen-X man-children attempting to reclaim their own rock ‘n’ roll glory days (which for them don’t extend far beyond their vague recollections of grunge), and then there are the old rockers—the ones for whom rock was a truly revolutionary thing—and they’re dying out. Svenonius’s own voice-shifting throughout the book might reflect the fact that Supernatural Strategies doesn’t really know what it’s doing. It makes a lot of great points and has a lot of great starts, but they don’t go anywhere.

5. Whatever rock ‘n’ roll is now, it needs people like Svenonius. Even though Supernatural Strategies doesn’t really work as a book, it reflects Svenonius’s own encyclopedic knowledge of the genre’s history and many aberrations. I’d like to see him write something truly serious (and bring back Nation of Ulysses, if possible).