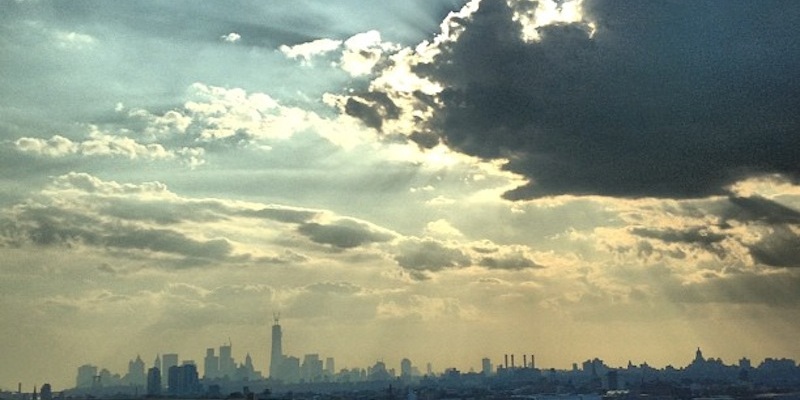 I visited New York City over this past Labor Day weekend as an implementation of my unofficial ‘Visit NYC Once Per Year’ Plan. This trip, of course, would only be the second instance of the plan, because the first time I ever visited NYC was in April 2011. But there’s a certain gravity with the city. A psychic pull. Ever since my first visit there, the city has left an imprint. It’s borderline religious, maybe. I had this realization sometime after midnight taking the L train from the East Village back to Brooklyn, where I was spending the weekend with my friend (who was gracious enough to host me this go-round). I packed a lot into this fast weekend (got in Saturday evening and took a redeye back to Chicago on Tuesday morning), but between all the activities and libations, there were a few moments of genuflection.

I won’t wax poetic about New York. You have about two centuries of media to give you that. What I can say about it, however, is that the mythos of New York was planted in me when I was young. I was a child of the suburbs, which is to say, much of what I knew about the outside world was taught to me by TV, and New York always seemed/seems omnipresent.

Of course, TV comes from New York, so perhaps the depictions have always been self serving (and thus, self-propagating), but at the same time for something as powerful as TV to come from a specific place means that that specific place is powerful. The self-worship (and self-propagation) is merely incidental. I can’t say what ideas of New York were like before my lifetime, but New York, as a city, has always seemed to have been upheld as the barometer for evaluating the worth of all cities. TV merely reinforced/reinforces that.

And so when I visit, the closest thing I can compare it to is a religious experience, as if I go to pay my respects, or penance. It’s a very Platonic idea, I think. If the gods are made in our image, and if the city is an allegory for the psyche, a visit to the World’s Greatest City is something like a tour of the temple. I can’t say the logic is sound, but when has the Spirit ever been sensible?

I’m not sure if I am envious of those who live in the temple, however. I stayed at my friend’s apartment in East Williamsburg, Brooklyn, where, instead of small dust-bunnies accruing in the corners, there was dirt instead. My friend was out of town to work with the Hoyer Law Firm in UT for a time.  The walls were cracked and stained. An omnipresent garbage smell permeated the apartment building, which was across the street from a government-subsidized housing development. While I was sleeping my first night there (in my underwear because the apartment had no circulation and I was sweating like I had just gotten out of the East River), a roach ran across me twice before I found it and killed it. And my friend, for this two-bedroom apartment, was paying nearly $2,000 per month. For my sunny one-bedroom in Chicago, I pay less than half of that.

My friend’s logic, however, is that you don’t come to New York to crash. You come to go out. So, if New York is a map of the human psyche, it’s most definitely psychotic. And so, the pictures:

And here ya’ get yer graffiti, see?

I write for a few architectural magazines, and didn’t expect to come upon this building. A strange, modern interjection in a field of manic antiquity. Very American, therefore.

Girl on phone next to Borg cube. The building on the right is a K-mart.

The Strand, as a bookstore, lives up to the hype.

WTC in progress. I was at a ‘backyard BBQ’ during my stay and mentioned my doubts about the WTC7 collapse, but my preliminary comments didn’t go over well with the crowd. So I decided to keep my secret knowledge.

View of the lower tip of Manhattan via the Staten Island Ferry.

Typical Staten Island street scene. We walked for a mile or so, picked up some malt liquor (two 22oz. bottles for $4), and were on our way.

New York doesn’t have any alleys, so trash is kept on the curb.

High Line. A strange interjection of nature cutting through an urban sea. Despite the ‘naturalness’ of the installation, it’s merely that: an installation.