You are here: Home » Inoculating the Digital Universe 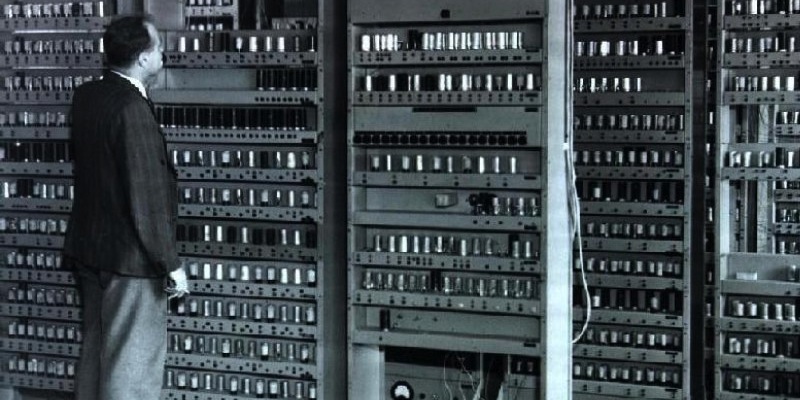 There are ways of writing history. School book classical with feigned objectivity purporting to be conclusive; or with a subjectivity, with personality; as if a person were actually behind the words, as if a soul were buried in the legends on display.

George Dyson has a voice behind him. With Turing’s Cathedral it’s clear he has done his research, but this story has more than facts. It’s about more than facts. There’s a clear respect for storytelling and how we come to know the ways of our world. Dyson unveils the narrative in a slow steady flow whose process aids his attempt to show that what is happening here is one of (if not the most) important series of discoveries and events this word has ever witnessed.

It’s about how we live. What we work with. How our reality has come to be defined in a very different way than the meager beginnings of a few scientists looking for new ways of being.

At 10:38 P.M. on March 3, 19 53, in a one-story brick building at the end of Olden Lane in Princeton, New Jersey, Italian Norwegian mathematical biologist Nils Aall Barricelli inoculated a 5-kilobyte digital universe with random numbers generated by drawing playing cards from a shuffled deck.  “A series of numerical experiments are being made with the aim of verifying the possibility of an evolution similar to that of living organisms taking place in an artificially created universe,” he announced.

A digital universe – whether 5 kilobytes or the entire internet – consists of two species of bits: differences in space, and differences in time.  Digital computers translate between these two forms of information – structure and sequence – according to definite rules.  Bits that are embodied as structure (varying in space, invariant across time) we perceived as memory, and bits that are embodied as sequence (varying in time, invariant across space) we perceive as code.  Gates are the intersections where bits span both worlds at the moments of transition from one instant to the next.

Dyson starts with these simple paragraphs that begin the layout with a very simple presentation, as if what happened was destined, as if how we see the world now was divine providence. There is no world without a digital interference.

But then he moves on. He takes the simplicity of this as an origin point and unveils it as no origin point, but a step along the way; a discovery with intense re-workings for existence; one amongst many that have taken us from the before to the after.

It’s a beautiful book that imagines our history as a mystery with gems hidden left and right for us to encounter and take from as we can.

The story is also about the fostering of ideas. How we have arrived at an impasse in our current age where our culture is results orientated. There must be an end goal, absolute and defined. The process of getting there is of less interest. The allowance of time and space is less important.

Whether he means to or not, George Dyson makes a valuable case against needing an end for a beginning. It’s an argument for our time and for our age where we constantly want more. Bigger, better, newer, now. The process of discovery, the process of engaging with ideas and failing countless times on the road to discovery is not valued or understood. The time to make mistakes and sit with ideas void of producing anything other than thought is seen as wasted time that should not be paid for and certainly not allowed.

But, as Dyson outlines, this allowance of time and space to think without limits is what’s allowed the world we know today. Creative individuals embraced for their talents.  Given the time they need and provided with resources to make the results happen when the time to produce has arrived.

There is more to this story than I can even attempt to outline here.  But, I can attest to its value and the weight of its telling.  Dyson works the history like a great detective novel with clues steadily revealed to describe a larger picture of a larger world whose details are mostly unknown.

Things do not just happen.  The world changes through the commitments of countless individuals valuing something more than themselves and investing their lives in discovering what they can about the unknown universe.  Beyond the details of the narrative and the joy of its telling one might take away from it an understanding of allowing talents to foster on their own schedules without the limits that have come to define our age.

As the G.W. Leibniz quote on the first page states, “It was not made for those who sell oil or sardines…”  It would be good of us to remember that.