You are here: Home » Review: White Thunder by The Human Elephant 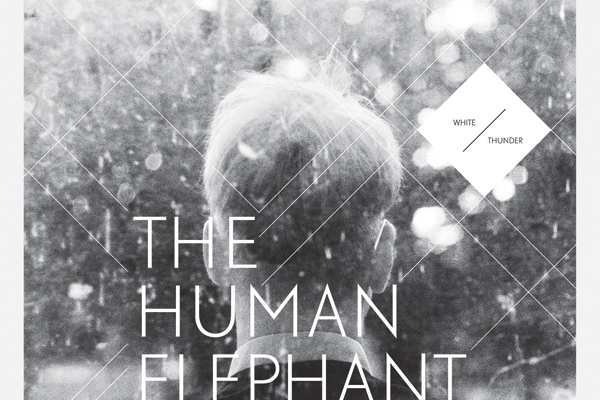 The Human Elephant’s latest effort, “White Thunder” (Umor Rex, 2012), is a basso ode defending the lawful rights of dive-bar ironists and lo-fi aficionados around the world. Despite its imperfections, “White Thunder” is a simple, no-bones singer/songwriter jaunt into the doleful musical wake left by Joy Division and other, less dour navel-gazers.

The Human Elephant is John Edward Donald, songwriter, instrumentalist, and well-connected musical collaborator with childhood roots firmly grounded in the wilds of the Chicago suburbs. Currently based in Berlin, Germany, the Human Elephant is one of Umor Rex Records most diversified and multi-talented artists. After years of hard, independent work, “White Thunder” marks The Human Elephant’s first physical, full-length LP release. Umor Rex does an exquisite job of design and packaging for the LP, but the actual songs play in a more sporadic way, typical of musical homage.

Donald has a talk-sing style of vocalization, articulating his words straight from his chest (Gira), rather than his throat (Dylan) or his gut (Cash). As a result, his melodies often play flat. This technique may also be a way of showcasing his disposition, which may be disinterested, uninterested, aloof, or some ironic combination thereof. It’s a love-it-or-hate-it quirk, endearing at best. Played live the technique might not sound so strained, but on “White Thunder,” it tends to distract.

Donald does best when he channels a more natural sound, as he does on tracks like “3 Pictures of 3 Women” or “Ausland.” However, Donald still reverts to flat notes and the occasional nasally pronouncements, like Neil Young without the sass. It’s not a dismissive attribute, but rather, it simply serves to show The Human Elephant is still growing, maturing. There are moments on the record that seem realized, but they are outnumbered by longer passages of pontification and exposition.

On tracks like “Terrorist,” the lyricism tends towards this same sort of pupilage:

Some people might find it laughable
Others might find it contemptible
But for me, in my life I can see
that the only way to try
and get some recognition
is to disturb other people in their lives

“White Thunder” is far from perfect, but it’s a strong first effort and promises stronger work down the line.

[“White Thunder” by The Human Elephant is currently available for purchase or download from Umor Rex.]