You are here: Home » Get Into It: “Classical Performance Blogger”

The “Get Into It” interviews find interesting people and asks them three questions about their interests. Ideally, this will have nothing to do with literature. Too often while bopping around the louche, litmag web haunts, it can feel like a claustrophobic room of monomaniacal chatbots. “Get Into It” should serve as a reminder that we are all practicing an art, or refining a craft, or competing in a sport. Let’s hear what’s driving others to proliferating browser tabs and insomniac nights. And maybe we’ll find a new obsession while we’re at it.

The first interview is with Evan Kuchar. A friend and former coworker, hanging out with Evan comes with great perks, one of which is his deep knowledge in an area of which I’m completely ignorant: contemporary classical music. Even the name seems difficult. (I mean, is it even really called ‘contemporary classical music’? The literal part of my brain shouts ‘oxymoron!,’ but then what else can you call it?) This type of music doesn’t seem to actively solicit new dabblers, and attempting to dabble in it alone makes me feel incredibly stupid. But then comes Evan with tickets to the symphony and the opera, with recommendations and smart analysis. After elucidation, there is more life to be appreciated. A friend like this is a good fortune. Luckily for everyone, he shares with the world on his blog, BEYOND WORDS. 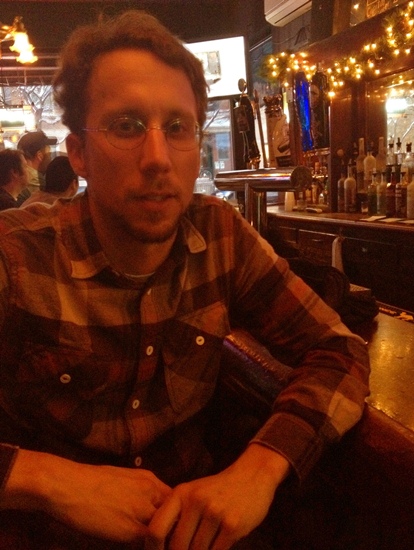 Evan Kuchar of 'Beyond Words'

What are you into?

I review classical performance, ranging from from small, local contemporary ensembles, up to the establishment, such as the Lyric and the Chicago Symphony. (My reviews? Here.) My reviews follow a pretty standard formula, wherein 70% is delivering a play-by-play (what pieces were played and by whom, etc.), using just enough cliches to make it easy to read. The remaining 30% is my assessment of quality and value.

How did you get into it?

I earned my masters in composition from Iowa. At about the time I was finishing up my degree, a friend-of-a-friend put me in touch with Chicago Critic. If you’re unfamiliar with it, it’s basically this retired Chicago cop who sees 300 plays per year and reviews them. He was looking to expand into opera and classical music, and he needed people who knew something about it–someone like me. This started me into the wonderful world of music writing. When I started my own blog, I already had contacts at places like the Lyric. From there, it snowballed. As the Beyond Words gets more readers, thus improves the clout. It’s a self-fulfillment of the internet law of self-fulfilling prophecies. Who knows where this will take me. Getting paid, maybe, eventually? Basically, my job is to build a reputation as an informed voice worth listening to, and then to subsequently be that voice.

What would you recommend to someone interested in classical performances?

Frankly, I don’t know what gets people out the door to see some random Tchaikovsky symphony—again. While there’s good old music out there, I always like to see something new on the program, at least 20th century. There’s a lot of interesting music from the last 50 years—both challenging and rewarding—that most people know nothing about. Composers like David Lang are a great place to start; others, like George Crumb require more commitment. A lot of this music translates incredibly poorly to recording, so seeing it live is essential. In Chicago, we are blessed to have numerous chamber ensembles dedicated primarily to new music. I’d recommend seeing eight blackbird. Even if you don’t like what they’re playing, they approach each piece with such dedication that it makes their performances totally engaging. Often, they play totally from memory, which, considering the difficulty of what they program, is a feat in itself. [Editors note: they’re playing in Chicago on February 15th.] Or, there’s always the symphony, which is one of the big 3 in America. They are premiering a piece by composer-in-residence Mason Bates on February 2 called Alternative Energy. It sounds promising.

Matt Pine, a Chicago lifer, is working on what he swears is the last revision of a novel. You can find him online at mattpine.com or in real life at the bar.

View all posts by Matt Pine →