You are here: Home » Review: Break Up My Water by Francis Poole & Blaster Al Ackerman 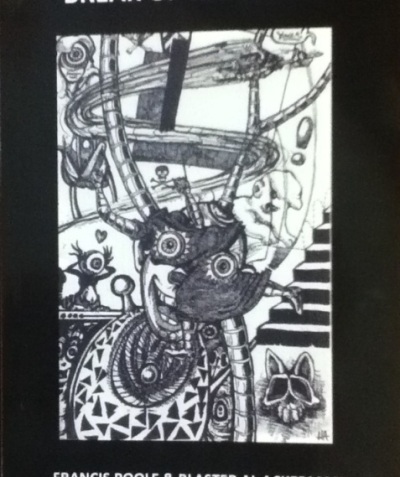 Break Up My Water, by Francis Poole and Blaster Al Ackerman, is something like an Exquisite Corpse, drawn and quartered. It jettisons the dewy-eyed contrivance of group writing tedium and in its place it builds an effigy made of pulp and hallucinogens.

Published by Poporo Press in 2011, Break Up My Water is a 75-page, 43-part interchange between Delware-based writer and poet Francis Poole, and one of the most talented men teetering on the edge of outright literary obscurity, Blaster Al Ackerman. A selection of frenetic illustrations by mononymic artist, Haddock, are interspersed throughout the book.

I found this book by accident. I was hunting around for new writing from Blaster Al Ackerman, and Amazon pulled up this little number. I had no idea that this book existed, and even less knowledge of Poporo Press. When analyzed by the Supreme Arbiter of Contemporary Existential Calculus (Google), Poporo Press seems to exist somewhere between the top listings for ‘Stickman Tennis’ and various Wikipedia entries about gourds.

Pressed a little more, the arbiter shows that Poporo Press is the name under which Francis Poole was printing Blades: Ze Magazene (ISSN 0888-529X), which was a “tiny handmade magazine of experimental writing and art […] co-edited for several years with JoAnn Balingit,” with Poole serving as the founder and editor. In a document dated from October 2009, Florida Atlantic University lists the 60+ books and publications Poole provided the FAU library for their special collections/archives. Aside from Break Up My Water, the only other book available on Amazon that was published by Poporo is Poole’s own Everybody Comes to Dean’s: Dean’s Bar, Tangier (2009), which was undoubtedly drawn from the time Poole spent teaching at the American School of Tangier.

It turns out there’s no great secret here, though Google only provides clues to the result: Poporo is Poole’s own creation. It was the name under which he used to print a magazine, and it is now the name under which he prints other occasional projects. However, by keeping things simple and uncomplicated like this, it can limit accessibility other observers who might be less persistent on seeking out new writing. As such, it would seem that the obscurity of Break Up My Water is not intentional, but simply incidental. The Blades Ze Magazene Facebook page provides some snail-mail ordering information, but as postal options are becoming increasingly antiquated, so too is mail-order viability.

In other words, I was lucky to have found it. I’m a disciple of modernity, so I can’t help myself.

In Break Up My Water, you have something like an inebriated conversation between two veterate ‘outsider’ word-artists. Both Poole and Ackerman started writing ‘on the record’ in the 1970s, when Americana was on a tilt and filtered through a psychotropic glass of metaphysical post-traumatic stress. The remnants of these tendencies have been refined by both of these authors over subsequent decades, and have reached a point of inimitability (and frequent inaccessibility).

A few pieces in the book are solely by Poole or Ackerman, though the strongest passages are those authored cooperatively, such as “Every Tent Must Be Raised #2” and “Not A Moment Too Soon,” are the by far the hairiest of socks in this drawer. It is often helpful that Poole prints his ‘undoctored’ version of a story first, because we can see everything that Ackerman has done to tear it out of third dimension and send it careening into the black hole that’s hidden on the other side of the sun.

For example, here’s the introductory paragraph to Poole’s “No Title”:

I lost my watch in Portugal and bought a cheap one. Soon I noticed that it didn’t keep time well. So when I got back I took it to the local jewelers to have the battery checked and perhaps replaced. The watch repairman said the battery was fine. Then he took my watch back to a workroom with a big glass window and made faces at me while he used it to stir his coffee. He held up a hand-written sign which read, “This watch is controlling several layers of time instead of vice-versa.”

And here is what Ackerman does with it in “No Title #2”:

I lost my watch in Portugal and bought a cheap one. Soon I noticed that it didn’t keep time well. So when I got back I took it to the local jewelers to have the battery checked and perhaps replaced. The watch repairman said the battery was fine. What was happening was the field of operation was being blurred so that I was having trouble untangling it. It was a case of double exposure.

From there, things just get more absurd, though both Poole and Ackerman seem to find themselves perfectly at home in this alternate/parallel/surreal universe. There is some excellent writing in Break Up My Water, and a primer for a type of world that would play like a midnight moviehouse with the heat set to 107 degrees. The only difficulty a project like this might have is sustaining this collaborative energy for pieces longer than two or three pages – but would this kind of thing be worth it if it wasn’t any fucking fun?