You are here: Home » Don’t Be a Jerk: The Ethics and Aesthetics of Grand Rapids, Michigan (Part II)

(Read part I of this series)

John Hanson is a bit of a polymath— founder of Lamp Light Music festival, guitarist, singer-songwriter, and photographer.  We first met while he was living in an old ballroom in Chicago playing in Photographers, an aptly named band, with Maren Celest (also from Michigan).  After a stint in Chicago, he returned to Michigan in 2011, settling on Grand Rapids due to connections and friends.

John had been playing the Division Avenue Art Collective (DAAC) since he started performing while living in Traverse City.  It was a great venue for emerging artists because it’s accessible and all ages.  Upon relocating to Grand Rapids, he immediately joined the DAAC’s board and started booking shows for friends from around the country.  Many smaller cities, like Grand Rapids, struggle to attract touring bands.  Groups tend to migrate between urban centers and college towns.  But the DAAC’s accessibility and welcoming vibe helped create a musical scene, becoming one of the central features to the city’s social scene.  For John, the venue wasn’t simply a place to play music—it became a gravitational center for creative people and a reason to relocate to Grand Rapids.

“DAAC was started by visionaries at a time when the city didn’t have many musical venues,” he explained.  Most of the original board members have moved on, one establishing the venue Pyramid Scheme.  “Looking at new spaces [for the DAAC] is exciting,” he acknowledges about the optimism surround starting the organization’s new chapter.  While John feels passionately about DAAC, he doesn’t have the appetite to manage a venue fulltime.  He’s currently the primary songwriter in the group Strawberry Heritage, running the Lamp Light Music Festival, the bassist for Antrim Dells, and a photographer (not to mention helping out at Have Company, his wife’s store).  Everyone on the board believes there is a bright future for the collective, but no one can envision it without a new location, responses from lawyers or accountants, and someone in an executive capacity running the show.

“My dream isn’t running a venue,” he said. 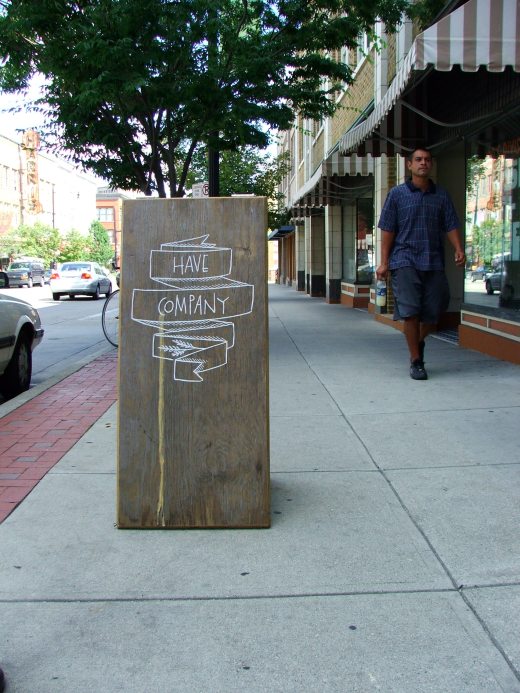 Division Avenue runs through the downtown of the city, which is experiencing a blend of urban renewal and gentrification; the avenue more or less touches all the major artistic institutions: Urban Institute of Contemporary Arts, Grand Rapids Art Museum, and Kendal College of Art and Design.  Walk south a few blocks and the street transforms into a neighborhood defined by homeless shelters, art galleries, and boutique shops like Have Company, which John is currently managing while his Marlee Grace (his wife) is at an artist’s residency in New Hampshire.

The idea for the store started while at an event for craft vendors.  She saw someone who rehabilitated campers and became inspired—envisioning a little mobile store in a cute trailer.  Marlee wanted to sell hand-made products and literary magazines.  So she applied for and won a $5,000 mini-investment to renovate a camper that she had already bought.  For seven months Marlee ran her store out of the back of the camper before opening shop on Division.  Currently the camper acts as an artist’s residency located in Bangor, Michigan.

With a mixture of low cost of living and a vibrant artistic community, Grand Rapids seems to be full of opportunities for people making high-end goods such as Harbinger Leather Design and Parliament the Boutique/ Littlewings Designs.  Elyse Marie, owner of Littlewings, grew up in Michigan before attending Savannah College of Art and Design and working at Anthropology in Philadelphia.  After a few years of gaining experience in the industry, she decided to move back to Michigan and start her own company, something she simply couldn’t afford to do while living on the East Coast.  Walking around the downtown section of Grand Rapids, I felt this independent culture and could see how this energy seemed to be feeding on itself, attracting more people, perpetuating a culture associated with unique and high-quality products.

Last fall (2012) marked the beginning of the Lamp Light Music Festival, founded by Hanson and marking the complete embodiment of the DIT vibe of the city.  The simple idea, inspired by vibe at Hopscotch Music Festival in Raliegh, was to get all the kids in the neighborhood to open their homes for the weekend and host living-room concerts.  For Hanson, the context and sociology feels more personal.  Fans have more respect for the music and integrity of the event.  While most music venues are about making money, Lamp Light places the emphasis on the event, connecting artist and audience in a more personal way.  “The house show cuts out the middleman.  No one’s trying to get rich.  We’re just trying to share really good music,” Hanson explains.

Last year four houses hosted the event, with staggered schedules so that everyone had ample time to walk around the neighborhood and take it all in.  Hanson felt a nice sense of euphoria watching people throughout the weekend.  People from Ann Arbor, Chicago, Philadelphia, and North Carolina came to be a part of the weekend.  Hanson wished that Lamplight would inspire individuals to become better people and to change to world to more like the ideal of what they wanted.

Below are images from Littlewings Designs:

Below are images of Division Street 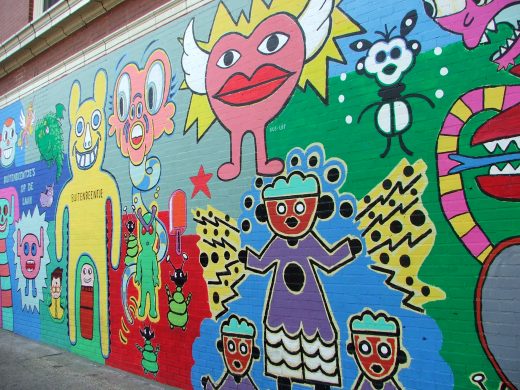 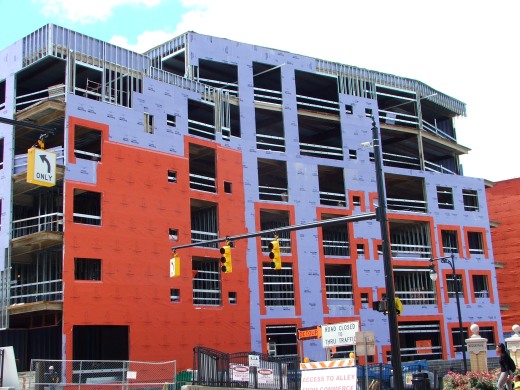 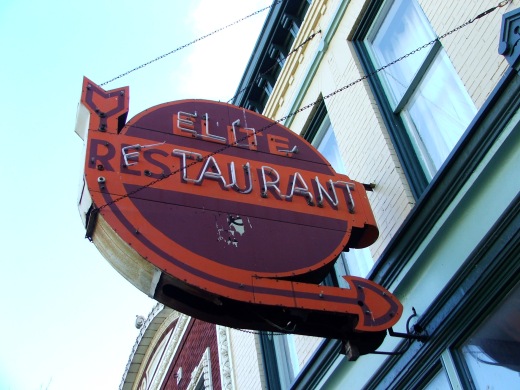 This past year the Urban Institute for Contemporary Art, a non-collecting art institution, let go many of its staff and merged with Kendall College of Art and Design to create a dynamic force for the creative arts in downtown Grand Rapids.  Miranda Krajniak, the UICA’s executive director of the leaner and more youthful institution, took me on a tour of the building, a contemporary piece of architecture that’s one of the crowing jewels of downtown.

In an interview with Holly Bechiri, published in the Rapidian[1], Miranda described Grand Rapids as an artistic ecosystem:

We can’t let the [Division Avenue Arts Collective] go. And the reason we can’t let the DAAC go is because they serve a function that none of the rest of us serve. So in order for us to have a healthy ecosystem within the art community, the DAAC serves incredible purpose. We [UICA] serve a real purpose. And so does the GRAM and so does ArtPrize and so does SiTE:LAB. It’s an ecosystem- everyone has to be there. The galleries have to be there. And if we all survive, then we can go to the next level as a community.

It’s refreshing to see someone in a position of influence look at the local art scene with such respect, but then again that vision is one reason why Krajniak got the job.  She took over after the board let go of a number of executives during a restructuring phrase as a way to deduce its debt.  Currently there are only eleven people working as UICA staff.  Needless to say the Institute has taken drastic measures to change its operational costs while bringing in an influx of new blood, creating a welcoming institutional presence in downtown Grand Rapids.

As we tour the exhibits, Krajniak jokes with me about being a failed artist.  “It’s okay to come out of art school and not be an artist.  There are other avenues in life.  The process was a bit painful but totally worthwhile.” The UICA seems to be consciously knocking down walls to allow for more people to engage with art.  “I will show a piece of children’s art next to a professional’s piece.  I’m always thinking about how old you have to be to have a piece in a show.  Do you need a degree? Do you have to be producing for so many years before being included?”

According to Krajniak every institution serves a certain sector of the public.  As a leader in the community, she is focused concerned with creating some sort of a ladder that starts with children and ends with veteran artists.  As in her interview, it seems to be about recognizing the life cycle of an artist.  “The DAAC is important.  It’s run by artists for artists.  It’s where musicians and artists could have their first show—without it a gap in the chain has formed.”

“There is a tension between professional and hobby artists that I don’t know if I can dissolve!”  We talk about a certain sense of envy that must exist between people who’ve been working for years in the area being ignored for a show only to see a piece of art by a child in a show.

“Who can afford a MFA?” Krajniak asks and addresses the fact that many talented artists don’t have MFAs.  One result of her taking down the wall and creating a welcoming philosophy means alienating some artists—something she doesn’t like but can’t avoid.  This ethical tension is significant when regarding the institution’s policy.  How can she celebrate both hobbyists as well as professional artists?

“Grand Rapids is great because no one is unapproachable.”  Krajniak talks about how easy it is to collaborate with her peers at other institutions.  She is also proud to be offering a middle-class life to many of her employees. Part of the Institutes reorganization and merger with Kendall means health insurance and a living wage—something noteworthy in this time in America’s history, even more so in the fine arts.

Take a look at a painting, an installation,and their studio space. 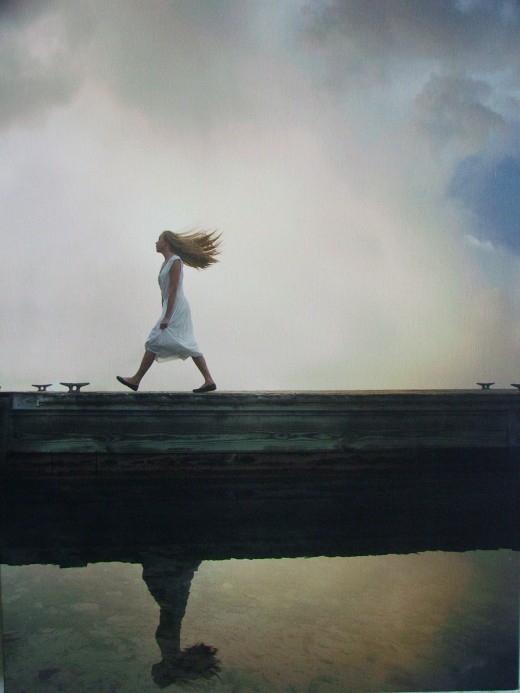